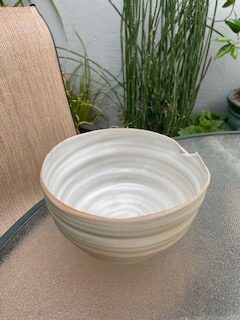 Roy Zajac began studying ceramics at the Interlochen Arts Academy, in Interlochen, Michigan, when he was a senior in high school. There he studied with late Jean Parsons, who taught ceramics and sculpture in the Visual Arts Department. After graduating from the Academy, he earned his Bachelors in Music Education from the University of Michigan. He was then selected to play with the Filharmonia del Bajio orchestra in Guanajuato, Mexico. While in Mexico he worked with local potters in Guanajuato and Valenciana, where clay was mined and mixed from the local mountains. His fellow potters in Mexico applauded his ceramics talents, and warmly encouraged a practical and functional trade as a potter, over a whimsical career in orchestral music performance and music education! Roy then received his Masters in Music Performance from the University of Minnesota. He came to California when he joined the United States Air Force, Band of the Golden West, in 1995. At that time, he became a member of the Potter’s Studio, a cooperative in Berkeley, CA. Today, he still enjoys working with fellow ceramic artists there. He learned much from Bob Johnson, Maija Williams and Jasmine Tom who where all members at the Potter’s Studio in Berkeley. As Principal Clarinetist in the Santa Rosa Symphony, most of his time is now devoted playing in various symphonies and chamber ensembles, and to teaching at Sonoma State University and in his private studio.

These pieces are high fired, over 2000 degrees and thus are safe for the microwave and cooking.